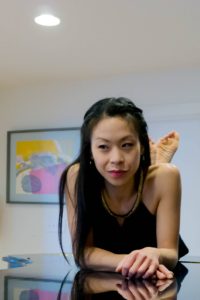 JEANNETTE FANG is an imaginative and expressive pianist whose dynamic performances have attracted the attention of both professionals as well as the concert going public.  She is the newest member of the acclaimed Garth Newel Piano Quartet, who perform over 50 concerts a year as artists in residence and artistic directors of the Garth Newel Music Center.

She has been featured at such prestigious venues as Alice Tully Hall, John F. Kennedy Center, Zankel Hall, Hill Auditorium, Peter J. Sharp Theater, Weill Recital Hall, and Steinway Hall, as well as appearing on stages in Europe and Asia.

Her most recent awards include the Gold Medal at the 2013 Seattle International Piano Competition, where she also received the President’s Award and Audience Favorite Prize.  She has earned top prizes in the Dallas Chamber Symphony International Piano Competition and the MTNA Young Artist National Competition.  She is the recipient of the Earl V. Moore Award and the Gottlieb Award, given by the University of Michigan, and the Elizabeth J. Parisot award from Yale School of Music, the winner of the Karlfried Nordman Scholarship Piano Competition at Juilliard, and was a National Presidential Scholar in the Arts in 2003.

As an avid chamber musician Jeannette has collaborated with such acclaimed artists as the Parker Quartet, Roger Tapping, Aaron Berofsky, Peter Frankl, Bonnie Hampton, Juliette Kang, Tom Kraines, Aisslinn Nosky, and Tina Dahl, and been engaged by the Taos Music Festival, YellowBarn Festival, Bargemusic, and Le Poisson Rouge.
Jeannette is passionate about new music. She was a founding member of the new music group Khemia Ensemble, and has worked with composers such as David Biedenbender, Aaron Jay Kernis, Martin Bresnick, David Lang, Sydney Hodkinson, Andy Akiho, and Pascal LeBoeuf.
Jeannette enjoys exploring many different interests, has published many articles on music, and currently hosts a podcast entitled So Many Wrong Notes. She received her DMA from University of Michigan, and holds degrees from Juilliard and Yale.  Her principal teachers have been Robert Mcdonald, Yoheved Kaplinsky, Julian Martin, Peter Frankl, and Logan Skelton.