On working with composers 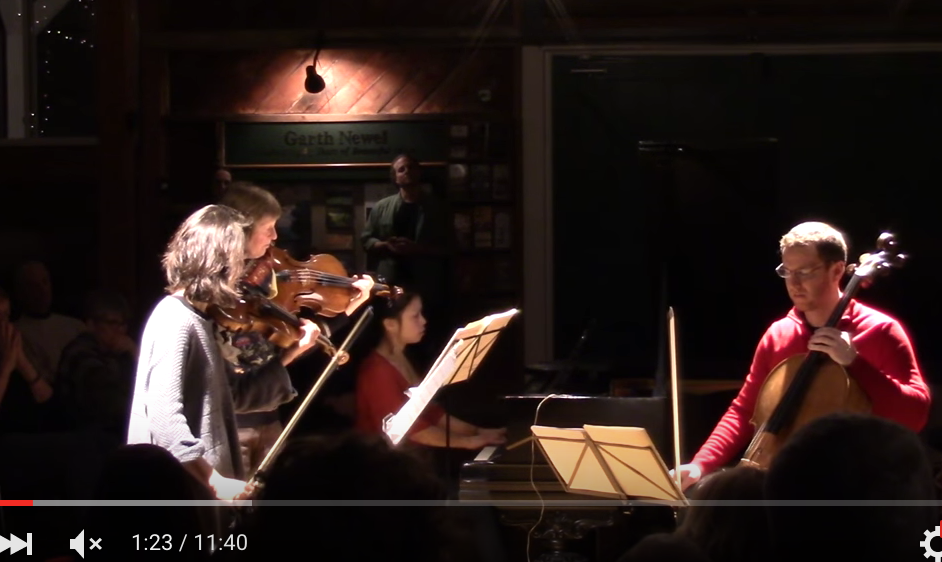 The thing that hooked me into new music was my addiction to solving puzzles.  Rapidly oscillating 9ths up and down the keyboard with too small a hand?  Regroup and quickly throw! Passagework which squirrels away from any comfortable hand position?  Sneak some with the other. Ostinatos of complicated rhythms underneath an equally complicated but divergent melody?  Group the rhythmic pattern with fingerings and think of two different tempi.  A labyrinth of notes suddenly makes sense!  And the birds chirp and the sun shines.  What seemed absolutely impossible an hour ago is finally possible, and a little game show chorus of “VICTORY” roars up in my scrabble-fanatic brain.

It is a thrilling discovery that notation is not a mandate, a realization that would not have happened had it not been for working with composers.  In a Beethoven sonata or a Chopin Scherzo, rearranging the designated hands in a passage is considered sacrilege, and is talked about in hushed tones as a “cheat”.
Finger to lips.
“I figured out cheat for this opening, but my teacher doesn’t approve”
Or in a piano jury, aghast whispers of
“Is he playing the opening of op.111 with TWO hands?”

But if you’re playing a new piece for a composer, and you’ve done a new hand arrangement,  or re-configured a super stretchy chord, they’re intrigued.
“Oh, so that’s how you do that?”
And the next thing you know, one of them is snapping an iphone photo of your music, or writing down which notes you’ve taken with your right hand.  My friend Carolina, Argentinian composer extraordinaire, has often said that it is a must for her to work with performers from the start, because she needs to see what can and can’t be intuited.

I treasure this spirit of collaboration. I’ve learned so much about the thought processes of composers through working closely with them, and the reasons behind why their various forms of notation have given me insight into other contemporary works.
For example, on our next pub concert Isaac and I will be playing Air by Kevin Puts. Puts has some unusual notation, including low chords for the piano’s left hand that should be in the bass clef but are instead written in treble clef.
At first this seemed nonsensical – I have to count 7 ledger lines, grumble grumble – but then it occurred to me that perhaps he was trying to get the pianist to be aware of the span of the chords. Visually the performer would understand the depth of the left in relation to the right, and would perform it with that bolstered understanding of it.  Like columns rising from the deep.

Or my friend Kaito, who wrote a piece where rhythms are broken down into 32nd and 64th notes in an incredibly slow tempo.  He actually wrote Khemia Ensemble a piece which begins with tempo = zero.  Of course, the first note the piano plays is a 32nd note within that tempo.
One of the first questions I asked him was “why do you write such little note values for such a slow tempo?”
His answer was: “It makes the performer think differently.  Every second matters more.”

Having the opportunity to work with composers has definitely improved my ability to communicate.  Their immediate feedback on whether I’ve captured the mood or character they were trying to portray is invaluable to knowing what works and what doesn’t.  Imagine how illuminating it would be if we had Schubert telling us if we got the exact tempo, sound, and feeling he had in mind for the opening of his last piano sonata?
It is often challenging to convey directives like “mindless but determined”, but in the process of trying, I get a lot closer than I thought I would.  I think that’s what I’m addicted to.  Not quite knowing what will work, but trying all sorts of different things to see what might, and having the person who wrote the piece eagerly brainstorming along with me.  It’s also just immensely fun to be invited into a creative process.

Which brings me to the main reason I love working on new music.  There isn’t an answer provided.  A pianist spends so much time with the standard repertoire, in which there is an expected way to play that Appassionata Sonata, a tempo that is “correct”, and an already museumified interpretation of it has been recorded a million times.

Learning a piece that has been played a thousand times is kind of like watching a plot-driven tv series with spoilers.  All your drive has been sucked out and you become sort of passive, only half internalizing the moments of power because they’ve already been laid out for you.
I am not arguing against performing the great standards of music.  They are great for a reason. Their emotional power still holds the ability to move us far beyond the mundane steps of the everyday. They are the powerful masterpieces that have been loved for centuries, and I will be the first to say that Brahms has changed my life irrevocably.
But if you ask me what’s more fun, being worried about pooping on the hallowed monument of a Brahms sonata, larger than life in everyone’s mind, or creating my own narrative with a piece no one has ever heard before, there’s no question.

And that’s why Garth Newel’s Pub Concerts have been a joy to prepare. Every piece we’ve worked on is unfamiliar to us, and rehearsals are a series of contemplation and quandaries and giddiness.  One of my favorite pieces to learn on our first pub concert in January was Silver Awakenings, by the 2015 Commissioning Competition winner Polina Nazaykinskaya, because it had such an intense and raw trajectory.  I was thankful that even though Isaac, Teresa, and Evelyn had premiered it already with Genevieve in August, that they still let me discover the piece as if it were our first time playing it.  They never imposed their interpretation on me, letting me figure out what sort of ebbs and flows I had an affinity for, and opening up the floor for discussion.  And I also thank Polina for her open conversation with me about her work, and for the feeling of mutual creativity that came from working on her piece.

Here is Silver Awakening from the January 30th concert of 2016.  Be sure to come by on February 27th for our 2nd Pub Concert of the year, which will include Paul Moravec’s Piano Quartet, written for Garth Newel Piano Quartet just a few years ago, the gorgeous Air by Kevin Puts, Zhou Longs Wild Grass, and Red Vesper by one of my favorite composers (and people), David Biedenbender.